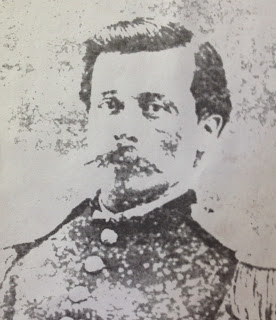 The Publishers:
BENSON T. ATHERTON of Fairfield, Illinois was the publisher of the Prairie Pioneer. He was a private in Company G 18th Illinois Infantry.  Atherton was wounded during February 1862 at Fort Donelson, Tennessee and sent home to recover.  He later returned to duty, but by a special order of Major General Ulysses Grant was ordered discharged on November 23, 1862 due to his disability from a gunshot wound.
CHARLES M. EDWARDS of Shawneetown, Illinois was a newsman before and after the war.  He enlisted as a private, but rose to the rank of 1st Lieutenant in Company B, 18th Illinois Infantry.  In February 1866, he was commissioned into the regular army as a 2ndLieutenant and again rose to the rank of 1st Lieutenant.  He served in the Dakotas and Texas.  In 1871 he retired on a disability.  He died July 30, 1879 in Taylor Falls, Minnesota. 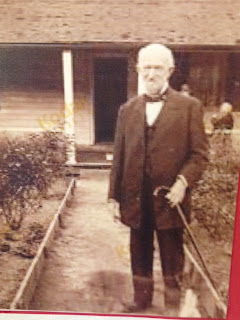 The Editors:
WALTER A. RHUE of Carmi, Illinois had been a publisher before the war.  He was first a private in Company G, 18th Illinois Infantry and later transferred to the regimental band.  He was hospitalized after the battle at Fort Donelson, Tennessee and discharged on March 14, 1862 due to a lingering illness caused by unhealthy water and exposure while serving in the military.  He died in Philadelphia, Pennsylvania on June 22, 1911.
ROBERT F. STEWART of Carmi, Illinois had been an editor of The White County Advocate prior to the war.  He was the 1st Sergeant of Company G, 29th Illinois Infantry.  Becoming ill during the action at Fort Donelson, Tennessee in February 1862, he never regained his health and lost most of his sight.  While Stewart was the editor and publisher of the Carmi (Illinois) Courier, his employees read the newspaper to him and assisted him with his signature.  He died on June 10, 1913. 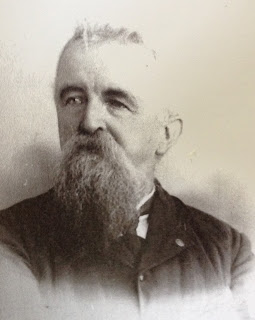 The Printers:
JOHN HARRIS BARTON of Anna, Illinois was 1st Lieutenant and the only officer among the ten first stripers.  He enlisted in Company I, 18th Illinois Infantry on May 11, 1861, and he was discharged on November 17, 1861 due to failing eyesight and general disability. On General John Alexander McClernand’s recommendation, he was commissioned 1st Lt in General Grant’s secret service and stationed in Cairo. He was an undercover agent ostensibly working for the Cairo Gazette. He bought the Cairo Gazette in 1864. During his newspaper career, he was an owner, publisher and editor.  He was born in 1837 in West Carlisle, Coshocton Co., Ohio and died on March 15, 1911 in Carbondale, Illinois. He is buried in the Oakland Cemetery in Carbondale.
JAMES T. BOZEMAN of Carmi, Illinois was a private in Company G, 18th Illinois Infantry and later transferred to the regimental band. He was an active member of the White County Bible Society and helped organize and provide Bibles to the people there. Bozeman built the Iona Mills that made “as good a flour as can be made anywhere in the country.” He is buried at the Old White County Cemetery in the city of Carmi.
THEODORE EDMONDSON of Fairfield, Illinois was a Corporal in Company G, 18th Illinois Infantry.  He was publisher of the Illinois Patriot.  The 1860 census lists Edmondson as a 17-year-old printer, born in Illinois, with $1900 in assets.  During the war, he was detailed as a nurse in hospitals in Cincinnati, Ohio and Memphis, Tennessee.  He was mustered out of service on June 1, 1864 in Springfield, Illinois.
OTIS P.  MARTIN of Peoria, Illinois was serving as Sergeant Major of the 8th Illinois Infantry Regiment while in Bloomfield.  On November 22, 1862, for unknown reasons, he was reduced to the ranks.  In July of 1862, he was detailed to take charge of the government printing office in Jackson, Tennessee.  He was mustered out of service on July 30, 1864.
JOHN W. SCHELL of Fairfield, Illinois was a sergeant in Company D of the 8th Illinois Infantry.  He was wounded in a shoulder by a mini ball during the Vicksburg Campaign.  He was held as a prisoner of war in July of 1863 and paroled in September of that year.  The 1860 Census listed Schell as a 22-year-old printer, born in Pennsylvania, with assets of $150.  After the war he married and became an Alabama farmer, but served during the Spanish American War as a brigade wagon master.  He died on August 6, 1917 at Grand Bay, Alabama.  The museum has a wonderful photograph of Mr. Schell courtesy of the U.S. Army Military History Institute at Carlisle Barracks, Pennsylvania.
The Stars and Stripes Museum/Library gives special thanks to Mr. Joseph Summers of Virginia Beach, Virginia for researching the Civil War pension records of these men and providing the additional information to the museum/library.